Hell in a Handbag Productions is the best and only camp and parody theater company in Chicago and quite possibly, the world. That’s what their flashy website says, so it must be true. But truth be told, Hell in a Handbag combines the art of camp, parody, and drag performance in a way that stands out even in the giant theater city of Chicago.

A quick note on camp: while much has been written on exactly what makes camp camp, the basic idea is that camp is a style that is very exaggerated, has a sense of artifice, and is appealing because of its bad taste and irony. Camp was also a code for “gay” back when it was necessary to use codes.

Founded in 2002, Hell in a Handbag Productions is dedicated to the preservation, exploration, and celebration of works ingrained in the realm of pop culture via theatrical productions through parody, music and homage. Or as they also say, “dedicated to the preservation of camp theater, in the most ridiculous way possible.” The Chicago Reader even calls it “The Gold Standard of Camp in Chicago.”

Speaking of gold, you may know them from their Golden Girls: The Lost Episodes series. Artistic Director and resident playwright David Cerda plays ringleader Dorothy in all her curmudgeonly glory. He’s flanked by a talented ensemble of fellow drag performers (and sometimes performers who are not fellows and sometimes fellows who are not in drag) who bring those beloved characters to life.

Audiences have enjoyed many a parody in Handbag’s holiday mashups like Rudolph the Red-Hosed Reindeer, Snowgirls: The Musical, and Silent Night of the Lambs. There were also classics like The Birds (Hitchcock parody), SCARRIE: the Musical (homage to Stephen King), Pussy on the House (like that Tennessee Williams play), and Christmas Dearest (Joan Crawford, but make it Christmas!). But POSEIDON! An Upside Musical was what put Handbag on the map, a New York map, to be exact. After a successful run in Chicago, the show earned the Outstanding Ensemble award at the 2003 New York International Fringe Festival. 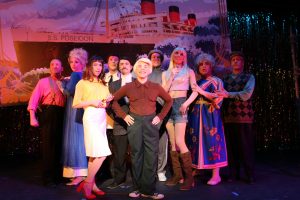 Part of the fun of drag and theater is performing for a live audience. “There’s nothing like the feeling you get when you know you’re performing for people that are totally on your side and ready for anything to happen.” says Handbag ensemble member, Caitlin Jackson.

And when the pandemic hit in 2020, they didn’t get their pantyhose in a twist. No, they got to work, honey, and took their act to the streets, got in their cars, and created their first ever Drive-In Festival. “The Drive-In was something I balked at when it was suggested, but it ended up being the most successful pandemic project. I was really proud of the ensemble because we worked together to make it happen. We even built the screen ourselves and had a chance to reconnect in person with our audiences and peers, safely—which we all needed,” David Cerda explains.

Hell in a Handbag also took their Golden Girls series to Zoom, where they invented a clever storyline work-around to explain video chatting in the 80s. (Because dramaturgy!) But as with many theaters making an unexpected digital pivot, there was a large learning curve. “The streaming shows were quite the challenge since we are not filmmakers, so it was a lot more work and stress than we imagined. Part of the Handbag experience is connecting with the audience, hearing the laughter. You just don’t have that with a digital format, so while I’m proud of the shows, we are eager to get back to LIVE theater,” says Cerda.

Since the turn of the century, the U.S. has gone through huge cultural shifts in terms of LGBT+ rights and visibility. Cerda offers his reflections on performing drag then and today. “It was a bit more subversive more when I started 25 years ago—there wasn’t even a Hairspray musical [on Broadway], so actors in drag was still considered edgy I suppose, but I’ve always lived out loud and what we were doing was and is the most natural thing in the world for us and our audiences. Now drag is more mainstream and sometimes feels like a product rather than an artistic expression. I feel like the world has just caught up to us!”