For Women’s History Month, we asked a few women in comedy for their thoughts on the industry, how it’s been, how to make it better for women, and where they hope it will go from here.

What is the best thing about being a woman in comedy?

Correy Bell, Comedian: The liberty and the freedom to talk about WHATEVER I want and still be a lady! I can talk about anything from childbirth to tapping a starter and make it funny.

Sarah Perry, Comedian: Being able to speak my mind and control a room full of laughter. Even if people don’t find me funny, the ability to express myself through jokes is the greatest feeling ever.

There are often a lot of stories about the challenges of being a woman in comedy, and how has your personal experience matched or bucked the status quo?

Jeanie Doogan: I feel that in a lot of ways I have been able to circumvent some of the harassment that fellow women comedians have faced. Maybe because I came into comedy in my 30s, and I have kids and an outspoken personality to boot. But I have certainly felt overlooked, ignored, or the double standards that women comedians face when it comes to bookings and pay.

Correy Bell: As a black female comedian I have to be louder, funnier, smarter, more appealing on stage but “not too sexy because the crowd won’t listen to you.” 🙄 I have to get up earlier and stay later just to land a spot on some shows. Other than that, I’d have to build my own stage and create my own platform.

Sarah Perry: A lot of people still don’t think women should be comedians. And I say people because I have heard that from women as well as men. I have hundreds of stories of male comedians, bookers, audience members, etc., being sexist toward me and women in general, but the one comment I get a LOT is from audience members after a show who will say to me, “You were so great! Before I saw you perform tonight, I never thought women were funny!” They think they are complimenting me when in reality they are degrading an entire gender. 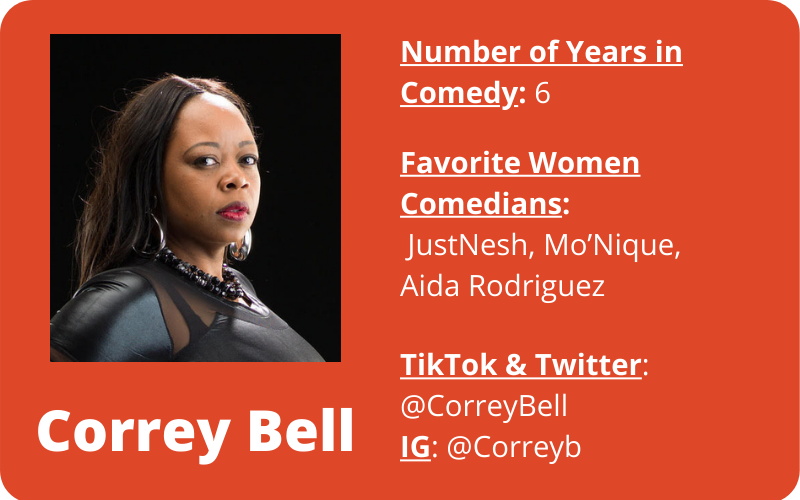 Are there still topics in their sets that women are discouraged from discussing or that audiences still resist hearing from a woman? Or other double standards that exist?

CB: Anything that makes a woman a woman. Pregnancy, sex, weight loss/gain, and more. Yet it’s still ok for men to talk about all of this and more and NO ONE looks at them sideways, prejudge them before they touch the mic or criticizes them offstage.

SP: I was once told by a male comic to not be so sexual on stage or else I’ll never “make it.” Then he went on stage and talked about his penis for ten minutes. So yes, there are definitely double standards but ever since that day, I told myself I would never let them get in my way.

Were there any challenges you faced to get to where you are in your career that your male colleagues did not face?

JD: Perhaps most of the challenges I faced came with being a parent in comedy; I think a lot of other comedians saw me as somebody who was doing this as a hobby. But the reality is, I was working just as hard as them and raising a family and working full-time. Even in the beginning I was hitting the open mic scene hard, writing relentlessly, getting on any stage that I could. On that note, as a mom, my priority has always been balancing comedy with my kids’ best interests first. They were pretty little when I started so I often turned down gigs, especially road gigs, because it meant I might miss their events or I didn’t have childcare. I’m not sure that exists at the same level for male comedians who are fathers.

SP: The ridicule for sure. A few of my stand up clips went viral online and the comments were brutal. Most of them weren’t even about my comedy but about how I looked—I was ugly or I was fat or even like dark, scary ones that I don’t want to mention. And when you look at other female comedians’ sets online, all the comments are similar. And then there’s just the classic straightforward “woman aren’t funny and will never be funny.” A male comic will never have to hear that.

What does the industry need to do to move the needle on gender parity and create actual systemic change?

JD: Give women a chance. Women of color in particular. More female headliners. More diverse lineups. When I started, 12 years ago, it was a huge no-no to put two women back to back on the lineup.

SP: That’s tough. It’s been going on for so long. But I guess the simplest answer would be to book at least one female comic on your shows. Even better: book 2 or 3. That sounds so doable but you’d be surprised. Most of the shows I do, I am the only female on the line-up to fit the “girl quota” so to speak. And when audience members see that it’s mostly men, it’s kind of embedded in their brains that men are the funnier ones because they are the majority on the shows.

What can our colleagues and allies do to support women in comedy?

CB: Buy our tickets, share our flyers, share our videos, cheer for us PUBLICLY, and stand with us publicly.

SP: See a show! Follow a female comic (or 20) on social media! Support all-female showcases and female-owned venues! But most importantly, don’t say anything about their gender to them when discussing their comedy, good or bad. 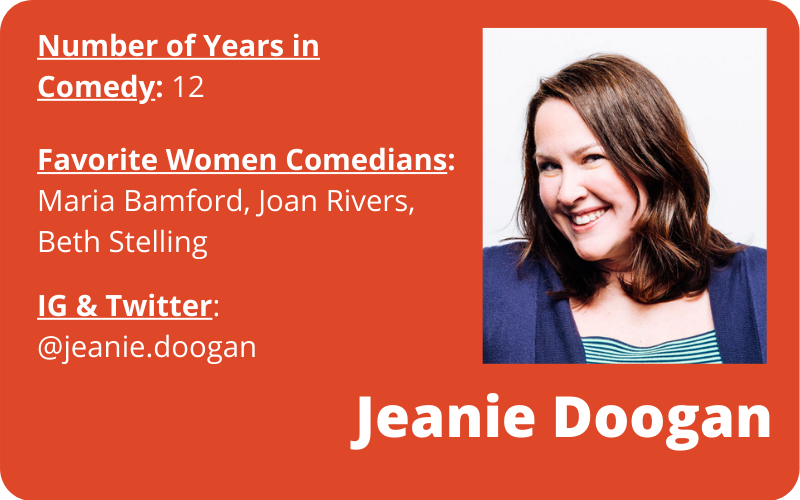 How have you navigated some of the challenges brought on by overt or covert sexism throughout your career?

SP: It definitely gets to me sometimes. But when it does, I just think of all the great, hilarious women that have come before me in this career. And in ANY career, really. To know that you’re not alone and that other women have dealt with it too, it makes it easier to face. I surround myself with only positive, genuine people—both in comedy and outside of comedy—and that has helped a lot. Some of my best friends are male comics who have never once made me feel inferior to them. So it’s men like that that make up for all the others.

How have you used your leadership position to promote positive change for women in the industry?

JD: I’ve recommended women comedians every chance I get, and I’ve mentored, or taken time to listen or give advice to anyone who has asked.

CB: I speak these names in rooms that you normally wouldn’t hear them in. I produce showcases that feature women from across the country. I make sure that we’re seen and heard whenever I get the chance.

JE: I’ve never had the thought there was anything that women COULDN’T do in comedy. They can, and have, been a powerful, impactful and brilliant force in comedy and in the industry.

What can other women do from their own positions in the industry?

CB: We need to stick together and promote each other as often as we possibly can. Be the change that we want to see.

SP: Stick up for themselves! Don’t be afraid to be called a “bitch” or “aggressive.” Honestly you’ll probably be called that anyways so you may as well fight for it! 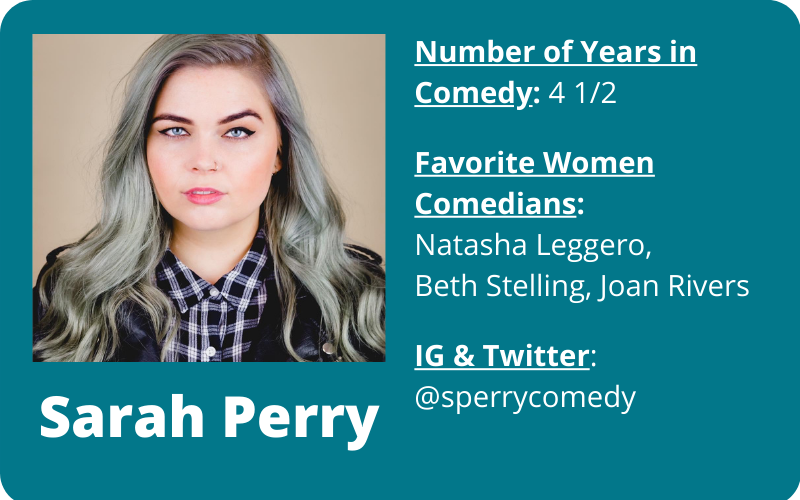 What is your hope for women and the future of comedy?

JD: My greatest hope is that we continue to progress toward more female headliners and normalizing diverse lineups. I have seen this change for the good dramatically in the last 12 years, and I hope we keep advancing.

SP: Put simply: that people see us more as professionals and less of an undesirable commodity.

JD: Laugh Factory has always been a supporter [of women in comedy] especially with Curtis [Shaw Flagg] at the helm and a self-produced show by all women comedians called All That Good Stuff on the South Side. They’ve brought a fantastically popular show to Western Avenue where it’s normally hard to get people to support the live arts. They always have diverse lineups, especially giving women opportunities.

CB: It’s an honor and a privilege to celebrate Women’s History Month as a woman of color and as an entertainer. We are marched in last and in a single file line when it comes to many different opportunities. I am happy to see that we are taking steps to creating the opportunities that we fight to get a spot on. Slowly but surely. . . we are winning!

Special thanks to Curtis Shaw Flagg and Laugh Factory Chicago for their contributions to this post.